Sensotec developed the new Passend Lezen Daisy app on behalf of the KB (Royal Library) Netherlands and the Passend Lezen library service. Their current Daisy reader app was in need of replacement for some time. With the launch of the new app, they choose for a customer- and future-oriented effective solution. 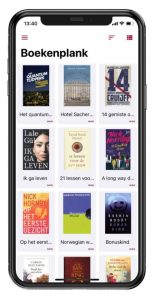 In addition to a new look, a number of new functionalities have been incorporated by Sensotec:

Sensotec’s Online DaisyTM platform consists not only of Apps, but also offers server solutions. Through this platform, more than 200,000 users are currently provided with accessible audiobooks internationally.

More information on Online Daisy can be found here.

Assistive technologies for people with

In addition to their shared history and vision, Sensotec and Lexima now also have a shared...
Read more

New : my Board Buddy helps the visually impaired read the smartboard

29/03/2019 Visually impaired students have difficulty seeing the IWB or other projections....
Read more

Research and development is an important part of Sensotec. Of the almost 40 employees who work at...
Read more
View all news

“I'm 10 years old and I have dyslexia. I can read but I'm slower and I make mistakes. I'm in year five now and the texts are getting longer. That's why it's great that I can use the reading software.”
Eleana, 10 years old
"I would like to thank you for all the help and support that you have given to Mrs R. The quality of her life - although she was practically completely blind - was the best she could wish for and you certainly contributed to that! Her "big beast" - as she called her new computer with speech technology - gave her much, even in her last week of life for which she was very grateful every day! Once again, my sincere thanks for that!"
Rosa, caretaker
"Very good company. You immediately get the information / advice you need." - via Facebook
Gert, visually impaired
View all testimonials
All Rights Reserved to Sensotec ® | Webdesign Webit