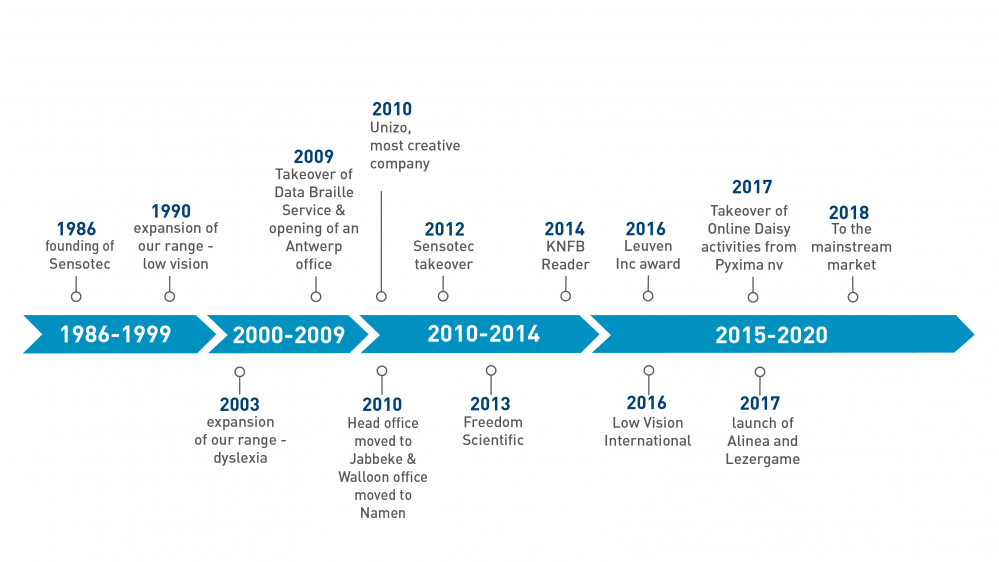 2018 – To the mainstream market
In late 2017, we won our first, large, mainstream public tender for the development of a word predictor, originally a product for people with dyslexia, but now to be turned into a general writing tool to be used by everyone. In early 2018, we won a second mainstream tender from the National Library of the Netherlands. We’ll begin developing an ebook and audio app that will enable the library to organise the process of borrowing ebooks in an efficient and customer-friendly way. In this way, we are bringing our expertise, which we have gained over more than 30 years through our work in the niche market for aids for people with vision and reading problems, to the mainstream market where our developments are considered welcome solutions to the challenges of the future.

In 2018, the KNFB Reader app, which was developed in 2014 as a reading app for people with a visual impairment, was expanded to be used by people with reading problems, and also professionals.

2017 – Launch of Alinea and Lezergame
2017 was an amazing year for launches. We released two new products: the compensatory reading and writing software Alinea & the educational game Lezergame, which provides reading training to young children and delayed readers. The game was developed in collaboration with Martine Ceyssens (speech and language therapist and author of ‘Mijn kind heeft dyslexie’).  Alinea is an expansion on and successor to WoDy. Alinea will become one of our international hits that will help us realise our growth.

2017 – Takeover of Online Daisy activities from Pyxima
Since 2011, we have devoted ourselves to developing the Daisy apps for iOS, and to great success. This development was carried out in collaboration with the Belgian company Pyxima, which focused on the development of the app for Android customers and the server support. On 31 March 2017 we acquired the full Online Daisy platform, the European market leader in this segment, from Pyxima. We now have control over the entire development: server support, iOS & Android app development and marketing.

The demand for online audio reading is growing worldwide. Blind and visually impaired people, speakers of foreign languages and people with dyslexia all enjoy listening to books, magazines and newspapers on their computer, tablet, smartphone or Daisy player. With 150,000 active users, Online Daisy is the market leader in Belgium (via the anderslezen app), as well as in Sweden, Finland and Norway.

2016 – Low Vision International
LVI (Sweden) decided to cease all its operational activities in Belgium at the start of 2016. We had the opportunity to become the sole LVI distributor in Belgium. This proved a great addition to our existing range.

2016 – Leuven Inc. Award
In February 2016, the ‘Leuven Inc. Award’ was held for the second time. It’s a prestigious award for projects that contribute to the promotion, stimulation and realisation of competitive and social entrepreneurship in Flanders. We received the prize as a role model for competitive entrepreneurship in a social context for the development of the KNFB Reader.

2014 – KNFB Reader app
In September 2014, we launched the KNFB Reader app for iOS, which quickly and efficiently reads or converts any text into braille through OCR (optical character recognition). You need only to take a photo or open your document.  The KNFB Reader was the first Sensotec product to be available worldwide and it was an immediate and overwhelming success. In three successive years (2014, 2015 and 2016), our app was awarded the Golden Apple Award for ‘Best Assistive iOS app’ for people with a visual impairment. Since then, we have also launched the KNFB Reader for Android and Windows and the app was expanded to be used by people with reading problems and also professionals.

2012 – Sensotec takeover
In 2012, Luc Desmet, the former CEO and founder of Sensotec stepped down in order to lighten his responsibilities.  The torch was passed on to Falk Beerten, whose company Skiobe bvba acquired the entirety of Sensotec’s shares. This takeover guaranteed the continuity and independence of our company.

2010 – Unizo: most creative company
In 2010, we were dubbed the most creative entrepreneur of the year by Unizo Noord-West-Vlaanderen. The jury expressed their appreciation for our activities that have a clear social purpose and vision for the future.

2010 – Head office moved to Jabbeke & Walloon office to Namen
Due to the healthy growth we experienced in the 2000s, we began to outgrow our head office. In February, we moved our Walloon office to a larger, easily accessible office in the heart of Namen. In August, it was time to move our head office, which was then located in Varsenare, to the current office in Jabbeke, which provided us with around 2500m² of office and storage space.

In 2009, we also opened a new office in Hoevenen so we were better accessible to our customers in the Antwerp and Flemish Brabant regions.

2003 – Expansion of range for people with dyslexia
In 2003, we expanded our range of products to include aids for people with reading problems such as dyslexia. Another priority was the localisation, software translation and adaptation of products such as Kurzweil 1000 & 3000 to local needs. Over time, this grew into a co-development arrangement, with the Sensotec R&D team collaborating with Kurzweil Education to define and develop new product specifications. These localisations, developments and the distribution were not limited to Belgium; we also expanded into many other languages and countries both in and outside of Europe.

1990 – Expansion of our range for visually impaired people
In 1990, after a steady growth in our range and our number of employees, the existing range of our in-house products and products developed by other manufacturers was expanded to include aids for visually impaired people, in addition to blind people. The strong service we provided to our customers was our trademark, as it remains today.

1986 – Founding of Sensotec
We originated from the Royal Medical Pedagogical Institute for blind, visually impaired, deaf and hearing impaired pupils, ‘Spermalie’. Inspired by the technological evolutions in the 1980s, the institute wanted to provide its pupils with more and better aids to make text and communication more accessible. Of course, the demand for such aids extended far beyond the walls of the institute and therefore, in 1986, Sensotec was founded as a cooperative company by just a few private investors. The company’s mission was to research the development & production of aids for people with sensory disabilities. One of the first products was Braildec, which decoded braille and converted it into printed text for sighted people.

All Rights Reserved to Sensotec ® | Webdesign Webit
Sensotec NV uses cookies to ensure that we give you the best experience on our website. More information.